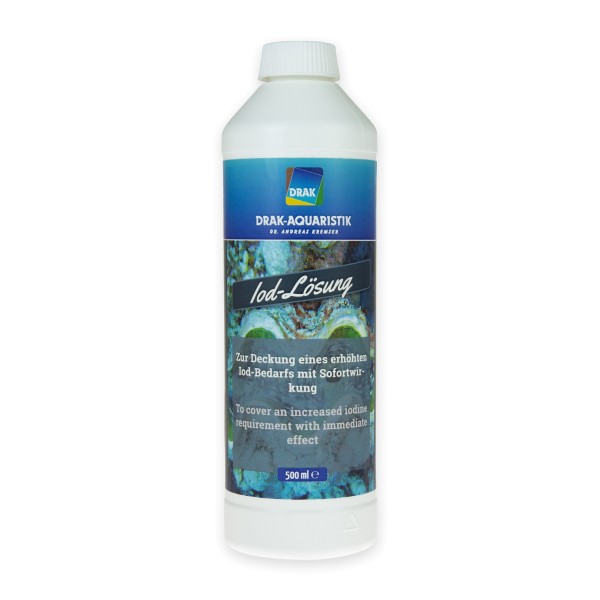 To cover an increased iodine requirement with immediate effect!

In addition, the water is enriched with the trace elements fluoride and boron.

is required to maintain cell functions and build up hormones and antibodies as well as to form tissue.
The very low quantity required makes conventional dispensing very difficult, as there are often excessively large changes in concentration here.

A lack of Iodine manifests itself, for example, when the polyps of large polyp scleractinia or corallimorpharia no longer expand to full size or their colours fade. However, too much, as shown by brown coloured precipitations in the tank, should also be avoided.

The invertebrates of fresh water also benefit from Iodine substitution. Frequent molting problems, a reduced willingness to reproduce and inexplicable failures may therefore be avoided especially in the ares of Central Europe with a lack of Iodine.

Fluorides are the salts of the highly toxic halogen gas Fluor. However, it has completely different properties from the gas itself.

The accumulation in the calcium carbonate skeletons of the stony corals may stabilise their metastable aragonite*- structure as assumed for strontium and barium.

* Aragonite is a form of calcium carbonate which is only metastable under the conditions that prevail in seawater basins. Calcite is the stable form.
If aragonite was not stabilised through foreign ions, it would rapidly transform into calcite and hence destroy the structure of coral skeletons.

Boron is one of the most abundant metals with a concentration of 4.6 mg/l in seawater. All plants, including marine and symbiotic algae, require boron as a micro-nutrient.

Precipitation can take place in form of calcium borate in particular when the pH value is high and calcium hydroxide is supplied.

Does not contain chelating agents!